‘Fine and delicate yet striking and strong, Melbourne calligrapher and illustrator Lynne Muir is like a piece of golden filigree. She reflects her intricate work and the steady calm it engenders. But Lynne’s calligraphy, design and illustration are not merely decorative. She is also prolific in her output. How does she manage to be so productive while maintaining such a high standard? ‘Discipline!’ she laughs. ‘I get inspired and drawn in; tracing the labyrinth of line around a spiral or a flourished tail becomes like a meditation’.

‘Lasting influences of middle-eastern and Celtic designs imbue the paintings covering the walls of her house as well as her calligraphy. The calmness radiating from her work comes from her own ‘sense of order instead of wanting to explode conventions.

‘Lynne is as accomplished in music as she is in art, singing traditional folk songs in the 70s and 80s and now classical music as a soprano in the Melbourne Symphony Orchestra Chorus. Whether working in art or music, Lynne finds a natural cycle in an artist’s life of inspiration and a famine of ideas; abundance and a drought of work; procrastination and dedication to the task at hand; of self-doubt and confidence.’

From an article by Cathy Oliver in War Cry, 2005

‘Every aspect of the book’s presentation adds to a most satisfying whole. A magical book not to be missed.’

‘At our AGM, your Waratah Bay logo met with universal approval from members who also expressed their appreciation for your professionalism in its design and execution.’ 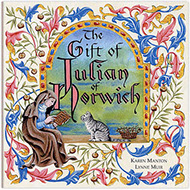 From The Anglican Media Bookshop,
on The Gift Of Julian Of Norwich, 2005